Are You My Mother? Giving a Broody Hen Baby Chicks

In my previous blog I told you all about my broody Buff Orpington, Louise. I was trying to decide whether to break her broodiness or use this as an opportunity to add to our flock.

We decided to get her babies, and chose to get baby chicks instead of fertilized eggs. The reason was that I was able to order the types of chickens we were looking for at the right time and we wanted to ensure they weren’t going to be roos.

After three long weeks of Louise sitting on no eggs, a wooden egg, or one of Lucy’s egg….and her pecking me when I would kick her out of the henhouse to get food and water the day finally came to pick up her new chicks!

My husband and I had a long day as a coop host for Raleigh’s Tour d’Coop. It’s the East Coast’s largest chicken tour. We had a blast showing off our American Coop and our big garden. But, we had a mission, we had chicks to pick up.

We drove 30 minutes and we ended up taking three chicks, (we were going to only take two….but…..well, you know how it goes.)

Lisa, from The Urban Chicken (a retail chicken store in Raleigh), lent us a brooder plate and carrier for them and suggested we wait until 10pm to slip them under Louise.

We went out to the coop at 10 pm, I took out an egg and slipped a chick under Louise. Then I repeated with another egg and another chick. Then by the third chick, Louise was moving around, she knew something was up!

My heart was pounding, but I got that third little one under her. Success….so far.

Then my worries turned to whether or not she would accept them.

So I woke up with the sun to check on them, and I saw a little chick head poking out from under her. Then another, then another walking around the nest box we were using as their temporary home.

My worries turned to complete joy!

What a relief. Operation baby chicks was successful and she loved them.

I obsessively checked on them throughout the day on Sunday. All was well.

The chicks aren’t the same breed as Louise or each other, I didn’t always have any eggs under her as she sat brooding, and it was longer than 21 days (24 days I believe). Yet despite all these factors, Louise was happy to have 3 new babies to care for. 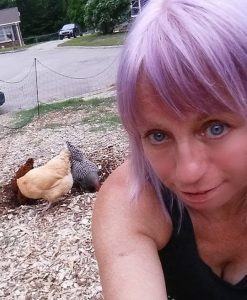 Chicken Fun Fact: Chickens don’t have a sense of smell like other mammals do, so they can’t smell the babies and realize they are not theirs, or didn’t just hatch.

Stay tuned to find out what happened next!