How to Successfully Add Chickens to Your Flock

I was able to add four chickens to my existing small flock successfully. They are all integrated and happy, so I wanted to share my experience with you.

When I got the opportunity to add to my flock and I jumped on it. I recently suffered the loss of 3 chickens and at the time Lucy, our oldest, was also sick with cancer.

My friend, Kristen, was looking to downsize her flock and she showed me some photos of young chickens she had. This was in November 2020. I wanted chickens big enough to fit in with my flock of 6, so no babies. Young, but full grown chickens ready to lay soon or had just started laying.

Kristen had an Olive Egger/Black Copper Marans mix that I was looking for since we lost our Olive Egger over the summer. I also picked out a big, beautiful Blue-Laced Wyandotte, and a Welsummer.

She told me the Welsummer was friends with a little bantam hen, so I had to take her too. They were a package deal. Never having a bantam before, I was a bit hesitant (about predators mostly), but wouldn’t want to separate them, so the banty made four.

WHAT TO DO
You don’t want to add just one hen to your existing flock. Chickens are pretty mean to outsiders, and can injure a new bird. Adding two or more of the same size is best.

FULL DISCLOSURE: I ended up adding just one bird later. (That’s for a different blog)

Normally it is advised to quarantine any new chickens before adding them to your flock. I know this, but I didn’t have a set up to do so. I trusted that Kristen’s flock was healthy. But be aware, without this step you risk the health of your entire flock.

The other important factor is space. If you have a lot of free ranging space, there is less fighting and less drama over resources, but again, I don’t have that much space.

I have a 25’x25’ area that is safe from aerial predators. That’s a good amount of room for 9 birds, but it’s not like have acreage to explore.

Set up a way they can be separated but still able to see one another if possible. This way the new birds aren’t constantly being picked on like a frat guy being hazed.

Add another source of food and water for the new chickens. Whether or not you can separate your flock and even after the initial integration, it’s a good practice to do this. Adding more resources means less fighting over them.
Accept there will be fighting. This is normal as the new pecking order is established.

In the morning of mid-November, Kristen dropped off the chickens. I had an area separated outside the run for the new girls and we put them in there. My flock could see them but couldn’t get at them.

It seemed to work, but the four new girls were a bit traumatized and got out of the area I had cordoned off for them. It seemed it would be fine as there seemed to be enough room to get away from each other.

Many would say, just let them work it out, but it got a little ugly and my husband and I wanted to separate the new girls to keep everyone safe while they adjusted. So we fortified the outside run area and put netting over top.

WHAT WORKED IN MY FAVOR

It turned out that two of my bossier hens were molting at the time, with another just about to molt. This actually worked well in my favor of integrating the new girls. Molting hens feel more vulnerable and are less likely to bully other chickens.

I also have a pergola addition to my American Coop. So at night I was able to close up the new girls in there for a night or two, while my other flock went to sleep in their henhouse. There was a roost bar for the new girls and they all ended up on there.

This was also favorable because the four new girls weren’t used to all roosting together, so they kind of formed their own little flock.

Then the rain came, so I left the two flocks in the separate runs for a day. They could still see each other but weren’t together.

Most chicken people will tell you to add new chickens to the henhouse at night when it’s dark. There won’t be a scuffle and they will all wake up together and everything will be perfect.

While chickens are pretty catatonic at night, doing this doesn’t work out the way people say it will.

In the morning, there was a racket. Once I let them out of the coop, things were better though. They all had more room to get away from each other.

Because I wanted to avoid the new chickens getting hassled so much, I woke up at 6:30 am for about a week, to open up the coop and let them out into their safe area around the chicken coop.

This is one of the times I wish I had gotten the automatic chicken guard run door.

I also had to put the new girls up on the roost bars in the henhouse for a few nights too. One or two of them would end up on the bar in the pergola, away from the drama.

After a week or so, they all went up on their own.

I also have two sources of water (hanging waterer and a waterbar) and I added another hanging feeder for food. Have more sources of food and water helps to keep down scuffles over resources.

As the new chickens were making their new home at my place, the new pecking order was being established. Libby, our French Copper Marans, was the youngest chicken and therefore, at the bottom of the pecking order.

So it was little wonder that Libby decided it was her job to bully the new girls. It was a job she took very seriously.

Within a few weeks I also observed that the new girls were not as separated from the original flock. They became fully integrated, and as if they were together all along.

IN CONCLUSION: Tips for adding birds to your existing flock

Add multiple birds so they can band together

Make sure they have enough space, open up your coop early in the morning for the first week or so

Add another waterer and feeder to limit resource squabbles

Realize squabbles will happen as a new pecking order is established 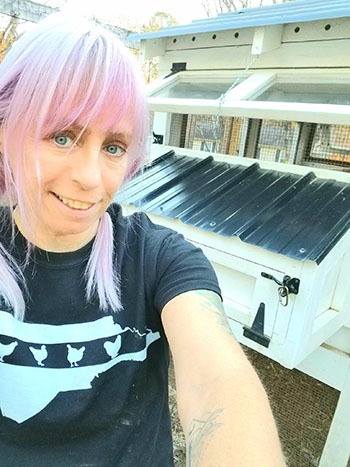 I hope this helps people who want to add more chickens and don’t have a broody hen to add baby chicks. I’m so pleased with how well the new girls have integrated into the flock.