Love and Loss and Backyard Chickens

It’s been a long time since I’ve written about my flock. We unfortunately had to deal with the loss of a few birds this past summer. I’m not gonna lie, it’s the worst.

My chickens are my pets. I completely understand that many people don’t feel that way about chickens. But for me, I had six chickens, then we added 3 more when one went broody. I was very involved with my girls and I was very attached to them all.

The first loss was our youngster, Olive. (the Olive Egger) She got either pecked or somehow her wattle got punctured. I thought she would get better and it would heal. I treated it as best I could, but there was tissue loss that went up to her mouth. She was about to undergo surgery to remove the dead tissue when the vet called and told us the extent of the damage. We had her humanely euthanized then. We were devastated.

Then her sister, Georgette (the Sapphire Gem) got sick. She was making an odd sound. To be fair, it was in the 90s and humid and all the birds seemed miserable. The next day I took a look at her away from the rest and it was clear she was having trouble breathing. We brought her to an emergency vet and made the choice to have her euthanized and have a necropsy performed to rule out anything contagious that would infect the rest of the flock.

She was in bad shape, and unlikely to recover. Birds don’t recover well from respiratory illnesses.

The thing is, birds hide illnesses because they are prey, and all animals hide weakness so they aren’t easy victims to predators. Also, since chickens within the same flock will pick on a weak or sick bird, it’s even more reason they hide their illness.

I’m not lying when I say Friday night Georgette seemed perfectly fine and by Sunday afternoon we were making a heartbreaking decision. The necropsy ruled it was a fungal infection in her lungs. In the wet, humid North Carolina summer, she could have gotten it from anywhere.

Losing two of Louise’s chicks (there were a little over a year old then) so close together was just awful. These were the first losses for us and we were not at all prepared to say goodbye to our young grey twins. (who were not twins, but different breed that looked so much alike)

A couple of months later Maude (Silver Laced Wyandotte) got sick. It was determined she had reproductive disease, likely cancer or a tumor. She was in bad shape by the time we took her to the vet because she kept seeming like she was sick, then she seemed better. In the end, there was little we could do for our dear Maude. She was one of our original six.

So now I was back to have six chickens. Five of the original six I started with and Libby, one of Louise’s chicks we gave her when she was broody.

Through this service, I was able to get the rest of the flock check out by a vet and veterinary residents. The stress of losing a third of my girls in such a short period of time was getting to me. Plus I was also treating Louise for bumble foot, so I wanted my chickens check out by professionals, but already poured hundreds of dollars into the care and diagnosis of the three we lost.

The vet and her students checked out each bird. Lucy, our oldest (about 3 years old) was also diagnosed with reproductive disease. She had a lot of fluid (which was removed) in her belly. She is living out her days here spoiled as ever. The rest of the flock was healthy and Louise’s bumble foot was pretty much healed, so at least I did a good job on that. It happened to be a mild case.

I mourned each and every one. I blamed myself for Olive’s death (I wish I had taken her to the vet right away). I was getting stressed out whenever one of them didn’t seem quite right and driving myself crazy.

I do take comfort in knowing I gave our girls the best life I could for however long they were with us. They lived better than most chickens do, I suppose.

I remember we got our six girls together. There was a man who helped us at the store pick out our birds. He had a bunch of chickens, had raised chickens and clearly loved her birds. He knew this was our first foray into the world of chickens and was giving us a lot of useful information.

While he was holding a 10-week-old Lucy, he told me, “Sometimes chickens just die.”

I never forgot that. 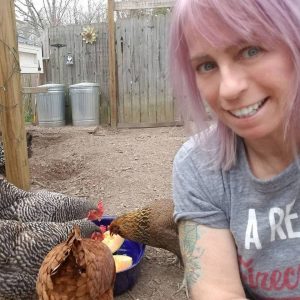 UPDATE: Sadly Lucy started to rapidly deteriorate the week of Thanksgiving. The wonderful vets at the NC State Poultry Veterinary Mobile Unit came back to try to alleviate some of the pressure caused by a fluid build up. This was also a problem with Maude earlier.
Draining the fluid didn’t have the impact of Lucy’s quality of life that I had hoped for, so two days later, one of the vets came back to euthanize Lucy at the college and they will all learn from her through a necropsy.

I miss my red beauty so much, she was truly the best chicken anyone could ever ask for. I am grateful I had three years with her, and I’m so grateful for the kindness and compassion the vets at the NC State Poultry Veterinary Mobile Unit showed me and my chickens.