My First Year With Chickens 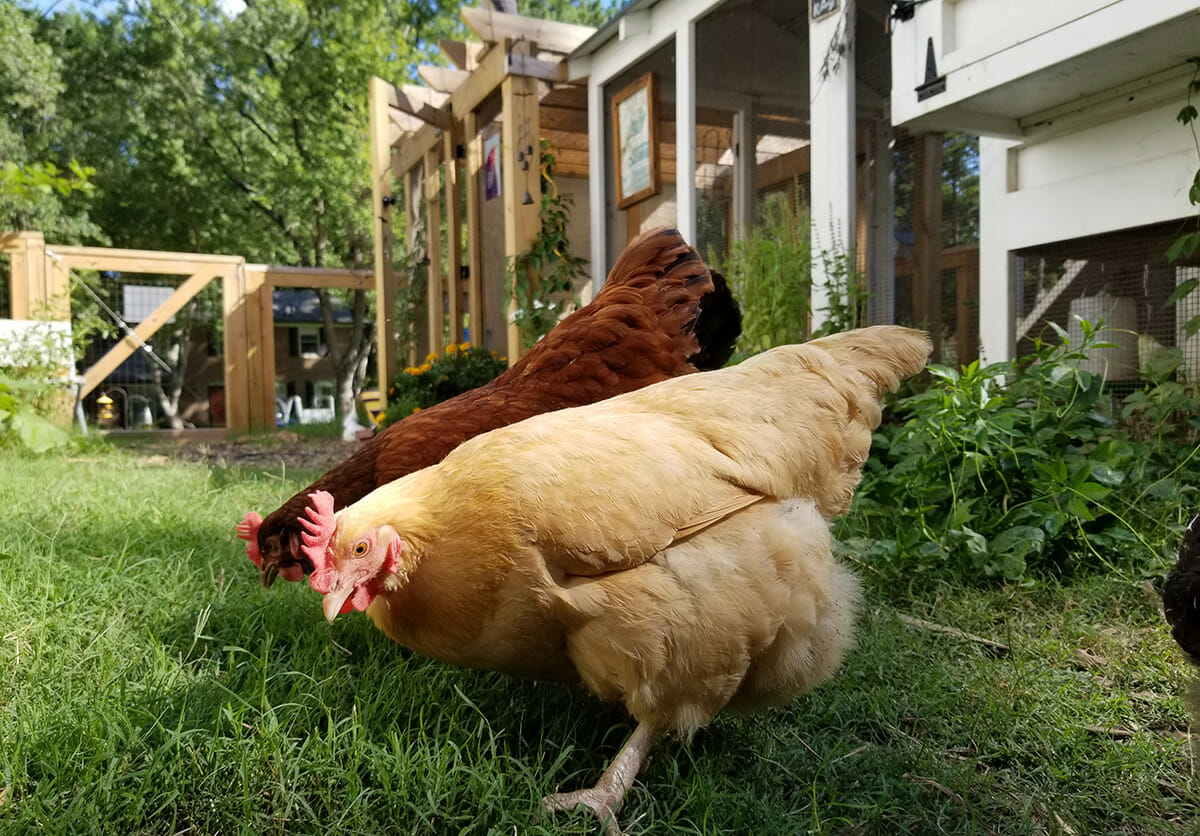 September 26, 2018 marked one year to the day that my husband and I got our six chickens. There was a lot to learn about chickens and what I discovered is no matter how much you prepare beforehand, it’s just not the same as when you actually have chickens.

So, here’s five important things I learned in my first year with chickens.

If you have the right set up, maintaining your flock is pretty easy

This is crucial. We are fortunate in that we got an American Coop, plus we added a pergola onto it. Our chicken coop is secure from predators, of which we have many here in Raleigh, NC.

Half-inch hardware cloth, Douglas fir wood, top-notch construction, predator apron around the entire structure, and a henhouse made for the deep litter system. All these features make it easy to keep my girls safe and I don’t have to put much effort into cleaning the coop. 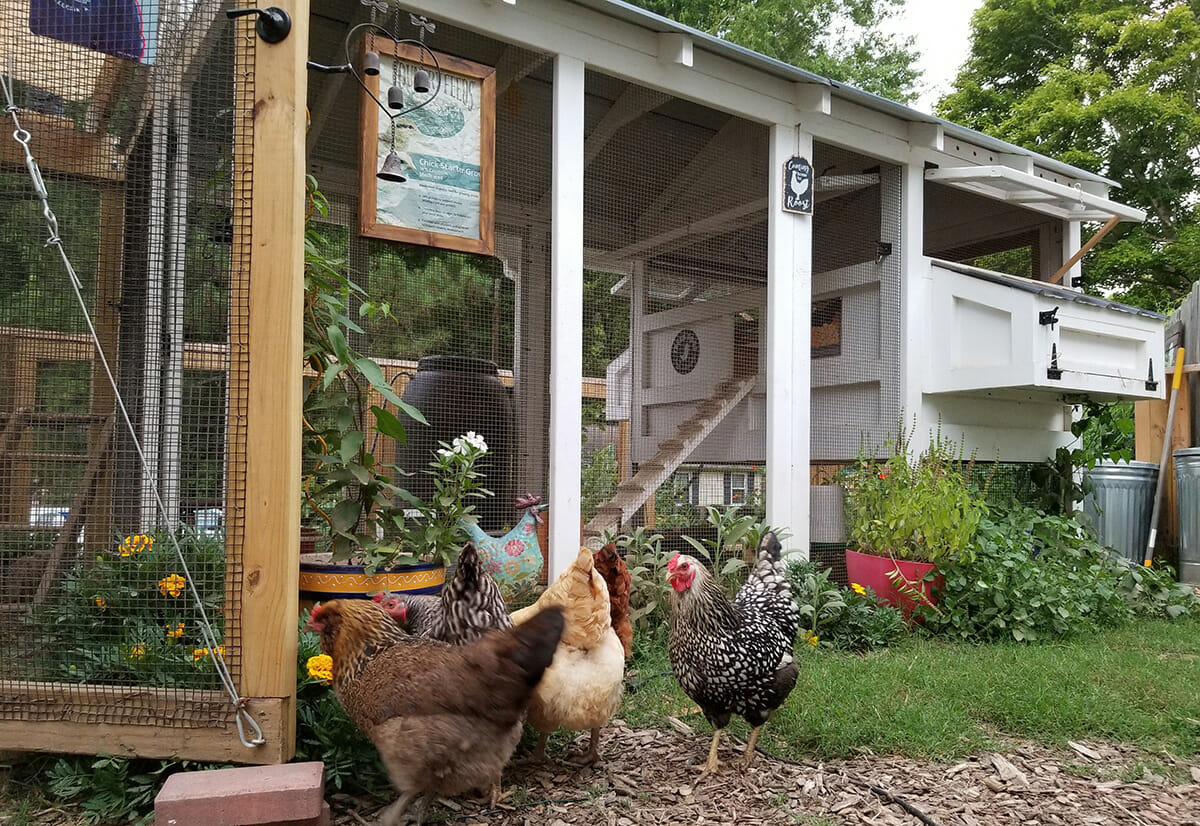 I use industrial hemp in the henhouse, which I break up daily and add new hemp on top every week or two. It’s been a year, I haven’t cleaned it out and it doesn’t smell. It’s composting in there and honestly don’t know when I will clean it out.

As for the run, it’s covered and stays dry. I do rake it out each day, just to flatten out the holes they dig and break up any chicken poop to keep the flies at bay in the hot summer months, (which in Raleigh can be until November).

I add organic material, such as grass clippings, leaves, pine chips, straw, etc. and that’s it. There’s no major cleaning involved and my girls are in there most of the day.

For me, maintaining a chicken coop, keeping the birds happy and healthy and safe is relatively simple.

Your chicken coop will never be big enough

There’s just never enough room for your chickens. Matt even told us so when we were first talking to Carolina Coops about buying a chicken coop. I didn’t realize how true that was until I actually had chickens for a while. 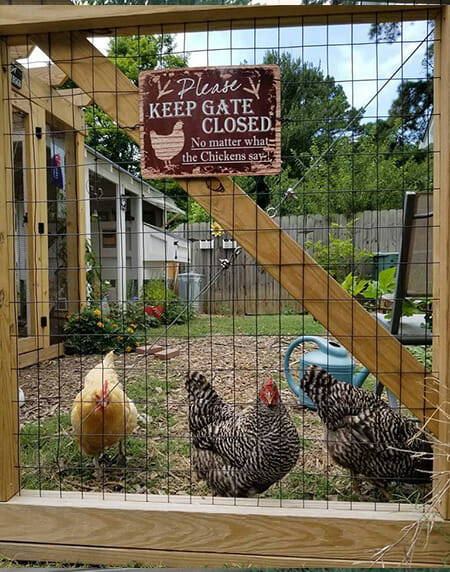 My coop to chicken ratio is fine, as a matter of fact, I could easily add more chickens. The American Coop is 6’ x 12’ and we added a 7’ x 8’ attached pergola area for the six of them.

And I give them lots of activities and things to do, but I still feel like they need more. I let them out in our fenced in area each day for supervised free ranging.

Because of hawks, eagles, and foxes, I’m not comfortable letting them out there when I’m not outside to check on them and keep a watchful eye to the skies.

So after a year of supervised free ranging, I am having that large fenced in area closed in to keep them safe from predators that would prey on them during the day. I will only have them out in that area when I’m home and I will lock them up in the coop at night.

Of course if I realized that I would feel this way earlier I would have had that area closed off on top when I had the fencing put in. That would have been much less expensive and easier to do.

So take heed future chicken keepers, you will always want more room for your chickens.

Chicken math is a thing, a real thing

The deal with chickens is they are like potato chips, you can’t just have one.

I will explain for those who don’t have chickens. Chicken math is the compulsion to continually increase your flock and usually get more chickens than you should have.

But look, that one is all by herself, I’ll just take that one too. Wait! Are those baby ducks over there? That, my friend, is chicken math.

For example, you go to the feed store to get chicken food and see a bin of chicks, and say to yourself, “Oh look, it’s they have Sapphire Gems, I’ve always wanted one of those, I’ll just get these two.” But then you realize they are straight run, (you can’t chance having a rooster or two, you need better odds) or if you get just two, you will have an odd number of total chickens, so why not get three or four more, or heck, make it an even six. But look, that one is all by herself, I’ll just take that one too. Wait! Are those baby ducks over there? That, my friend, is chicken math.

We have been really good about holding off on adding to our flock of six, but it’s not easy. My husband and I both have certain breeds we want to get, however, our space is limited. We can’t keep expanding the coop or their run areas. The chickens can’t have free reign on our property, and we aren’t getting rid of our girls when they stop laying.

Given all that, we are waiting to expand our flock for a few years to stagger our egg laying hens. But let me tell you, the struggle is real. Going to pick up food, stopping at flock swaps, seeing chicken groups on social media; all this exposure to chickens makes it really hard to refrain from getting more.

Each chicken is an individual with her own personality

Breed traits are good guidelines, but let’s face it, every once in a while there’s an Orpington that hates to be held or the occasional broody Barred Rock.

I have a Rhode Island Red (Lucy), two Barred Rocks (Wilma & Betty), a Silver Laced Wyandotte (Maude), a Buff Orpington (Louise), and an Easter Egger (Hazel). With my six pack, as I refer to them, I have seen their personalities blossom as they went from chicks and pullets to big, fluffy girls. 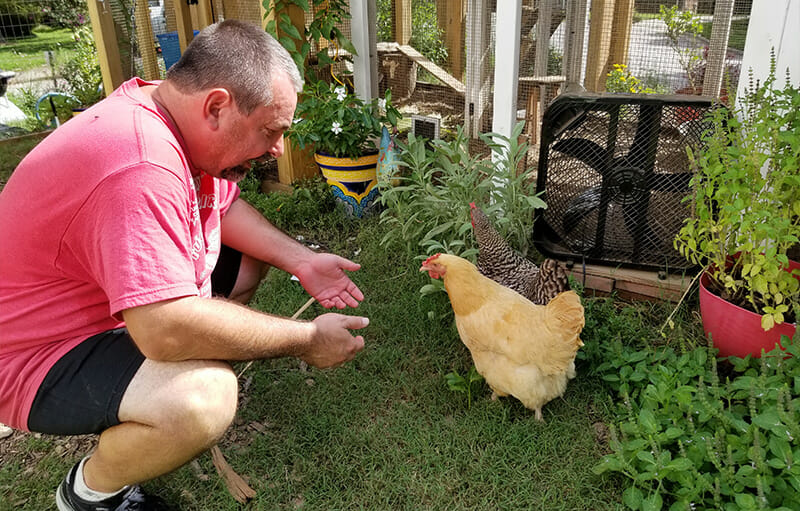 With all their idiosyncrasies and established pecking order (meaning picking on the younger ones), they are all very close and seem oddly dependent on each other.

Even Wilma and Betty, who I suspect were from the same clutch of eggs, are different, even if they are always together. Betty is probably the most dominant hen in our flock and she is definitely the friendliest. I call her my ‘dog chicken.’ She is also the first to grab a grub out of another’s mouth. 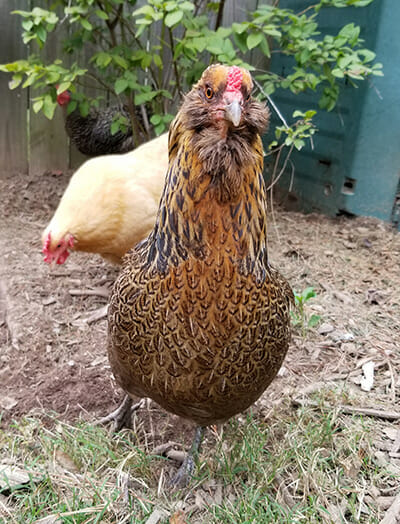 Lucy, the oldest, is an all-around amazing, perfect chicken. She silently is the boss and usually gets the spot on the roost bar near the window that she desires. She never seems to cause any trouble and was very motherly to the three youngest when they were little chicks.

Maude is submissive to me, but a bully to the other two younger ones, Louise and Hazel. She is sweet and lets me hold her. Louise is also a sweetie, but isn’t as affectionate as Orpingtons usually seem to be. She gets bullied by the bunch so that may play into in, she also seems the most independent.

And Hazel, with her beautiful feathers and blue eggs, is incredibly skittish and the only one I can’t hold. If I try to get her, she flies.

One day, Hazel, one day I will hold you.

Chickens are smart and capable of being trained

As I mentioned before with Wilma, chickens can be trained. They figure things out too and understand cause and effect. Chickens can recognize faces, voices, and have great memories. Everyone who has chickens knows the feeling when they run over to you when you approach their coop. 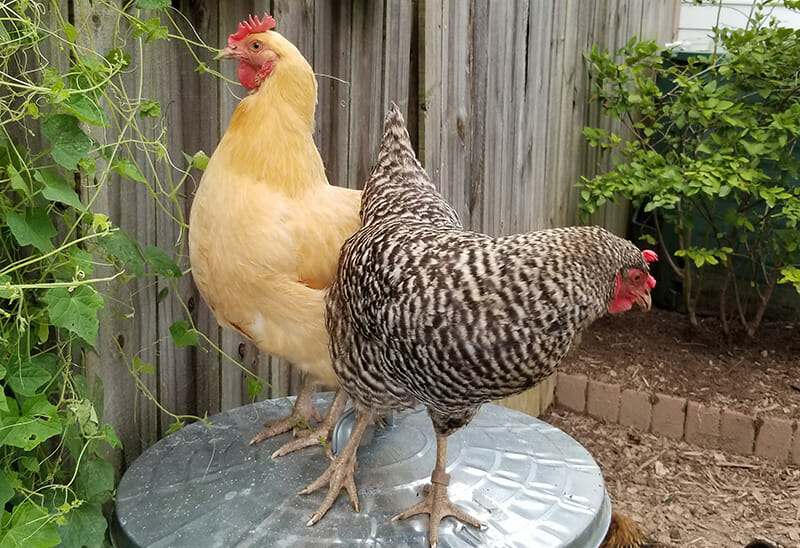 I am also working on associating a bell ringing when I throw meal worms in the coop to get them back in the run. And when one learns something the others usually follow along.

The more you are around your chickens, the more you see how incredibly smart they are. That’s not to say they don’t at times exhibit bird-brain, flighty behavior, but chickens have a complex vocabulary, they can figure things out, they can recognize 100 different faces, they can learn new behavior, and they do remember things.

In short, they are a lot smarter than people give them credit for being.

And lastly, you never fully realize how much you enjoy and love your chickens until you actually have chickens.

I knew I would become attached to my birds, and learn everything I could about chickens and their behavior, what to feed them, and how to best care for them. 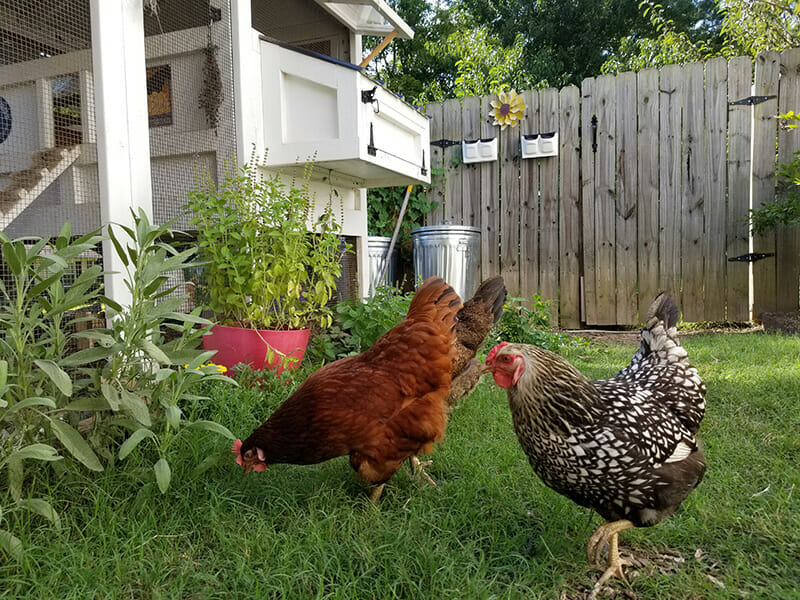 I know that about myself when it comes to any animal. But I couldn’t possibly imagine how attached and how much I love these six little birds. I love having chickens as part of our little urban farm, and although I love my cute six pack, I can’t wait to add more birds over the years.

But then again, we wouldn’t change a thing.
Our Six Pack 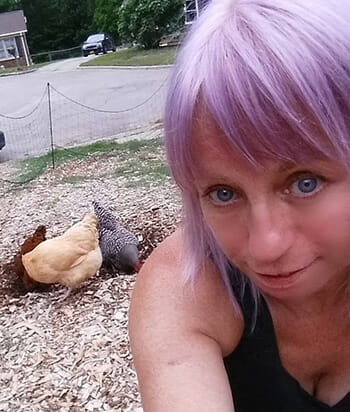